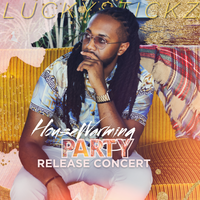 Join Luckystickz with the Underground Live band as he performs songs from his new E.P. "Housewarming Party". Also catch an inside scoop from Luckystickz about each song and receive a FREE download of the E.P. 1 week before it goes public!

Born with a passion and rhythm so key to his being, Canadian singer, songwriter and steelpan aficionado Luckystickz is a renaissance artist. His first true love was the beat of the drum and later included the majestic tinkling of the steel drums. Today, Luckystickz enjoys the best of both worlds, excelling both as a recording artist and percussionist.

His Jamaican and Trinidadian heritage mixed with his Canadian nationality is reflected in his eclectic sound. Drawing from soca, dancehall, R&B and gospel, Luckystickz coins his sound Afro R&B/Pop. Luckystickz broke ground with his debut EP Every Day Battle. The release garnered him a loyal and growing international fan base and media attention, with Vibe 105 featuring him as their "Canadian Come Up Artist".

Lucky's pure, silky vocal tone and melodious steelpan treatments is a signature sound that has taken him all around the world, allowing him to tour in countries throughout the Caribbean, Asia, Africa, and North America. Luckystickz is also among the heavy-weight alumni of Berklee College of Music, where he graduated with a Bachelor of Music in Music Business/Management. While there, he had the opportunity to perform and work with music legends such as Harry Belafonte, Brian McKnight and Chilli.

In July 2021, Luckystickz returned with more Afro R&B/Pop sounds with his new summer jam "Strangers", the first single off of his upcoming EP Housewarming Party. Now he is back releasing an exclusive virtual concert with his live band, giving you a behind the scenes scoop story of each song as well as performing all the tracks off the E.P.